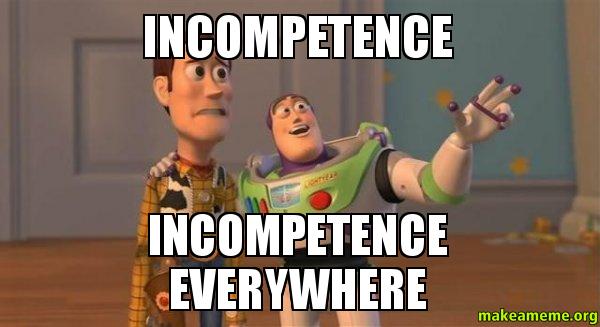 “Hello, Mr. Stokoe, I’m afraid I have an apology to make – we spoke on Tuesday night but I forgot to save the comments onto your account, can you remind me what we were discussing?” said Mike from painfully incompetent ISP, Plusnet, a subsidiary of BT.

The adverts were full of it, Sky Unlimited broadband for as little as a fiver a month – so long as you had a Sky TV subscription – which we did. I gave Plusnet a call – reluctantly – I’ve been a Plusnet customer since 2001, I’ve had numerous home and business broadband connections through them and their service has been mostly good. I stayed with them through that nasty business of them giving their customer details to ACS:Law, the law firm whose owner was convicted three times of “conduct unbefitting a solicitor”, who has since been suspended from practising law and is now bankrupt. But on this occasion they just couldn’t compete with Sky’s unlimited package…

“We’ll match it,” Plusnet said. Oh, right, marvellous. “It saves you having to transfer everything over to Sky.”

Many years ago I used to work for Orange Telecommunications PLC, at the time the UK’s 3rd largest mobile network, and this taught me lots of things about how organisations whose livelihood is build around monthly contracts operate. For example, everything is itemised on your account – from your line rental to your handset insurance, and everything has an ‘end date’. Perpetual items, such as your line rental, simply have an end date that is so far in the future that it unlikely to bother anyone alive today. But it’s there, sitting, ticking away waiting to expire.

And discounts have end dates too – especially those from the Disconnections department (“Retentions” as it was known when I worked there, but I think it’s now “Customer Options”). If you want to leave a phone network and they give you a great deal to stay then that deal will likely last for the length of your new contracted months and then drop off your account without warning.

It is a system that I am au fait with and I did not want to be stung by. To be fair to Orange, this is how practically all networks operate (or at least they did in the mid 2000s).

I’m a very busy person, I work upwards of 60 hours per week (sometimes a lot more) and I don’t have time micromanage my utilities, so if this discount was simply going to fall off my account and double the cost of my broadband in 12 months it wouldn’t make sense – and I’d just go with Sky broadband instead and save myself the headache (and expense) in 12 months.

But no, they reassured me: this is a Retentions plan, it’s only available to “loyal customers like you”. I was further reassured that it was not going to drop off after 12 months, but the Retentions agent would put my name in “the diary” to call me in 12 months anyhow to discuss the package and see if there was anything else he could do.

Naturally, I signed up.

The next bill I received showed a line for “Unlimited Charge” followed by a line for “Retentions Discount” and alarm bells started to ring, but after two or three lunchtimes at work spent trying to call Plusnet I gave up.

And anyway the next bill didn’t show any more “Retentions Discount”, instead it showed a “Special Offer Discount”, which sounded very much like a perpetual item to me, so I left it at that.

In February 2014 I found some time to review the last 6 months of utility bills that had amassed in my in-tray. Sure enough, that Special Offer Discount had dropped off my bill exactly 12 months after it had been added and I was now being charged nearly £40/month for broadband and a telephone line.

I tried to contact Plusnet by phone several times to no avail and, to be honest, I got caught up in a project at work and it slipped my mind until the following month.

After 6 months of trying to get a mortgage sorted out for anew home (to be covered in a separate blog about another company I won’t be doing business with again) we finally got a moving date. I tried repeatedly for weeks to get through to Plusnet but the queues were very long, and on the odd occasion when I did manage to get through, I either spoke to someone who was very rude and didn’t bother doing due diligence looking at the account (and clearly needs training on when price matching started!!!) and also hung up on me mid-call when I was trying to explain the situation and beginning to prove him wrong:

… or I was told their computer systems had broken and somebody would call me back (nobody ever did). So I did what any loyal custom who had been dissed by a company they’d been diligently paying money to for over a decade, I took to Twitter.

.@plusnet Amazing your call centre is hit by a technical issue just at closing time that means all calls need to be handled tomorrow @ofcom

Plusnet and the Twittersphere

@plusnet Another 30 minutes on hold just to get passed around then fobbed off. Follow me so I can DM my username and you can ring me tomorro

For anyone considering a switch to @plusnet please be aware that all their internal computers have been down for over 14 hours now @WhichUK — Richard Stokoe (@richardstokoe) April 8, 2014

Oh my god @plusnet just cut me off as soon as they answered. Avoid this pile of manure company!!!!! @Ofcom @WhichUK — Richard Stokoe (@richardstokoe) April 8, 2014

And soon the big boys of UK consumer advice stepped in:

@plusnet Can you help @richardstokoe? Looks like he’s getting no joy from your customer services line…

But again, after more incompetence by Plusnet…

@plusnet back on hold. You’ve not called me on the right number (as described in DM) or from the right team #BeyondAJoke — Richard Stokoe (@richardstokoe) April 8, 2014

… I had to call them myself.

@plusnet it’s fine I’ll do it myself.

Plusnet: “It’s your fault for letting us screw you over”

After Which UK stepped in to bring attention to my plight (Plusnet, it really shouldn’t have got to that -sort yourselves out FFS) I got a phone call from a guy called Mike.

I explained the situation to Mike, he agreed that there had been a price match applied (thanks for your rude, arrogant, beligerence, Glen, don’t you know the customer is always right?). However, while I was equally confident I hadn’t been the victim of a 12 month discount, Mike was sceptical and he said he would need to go through the notes on my account’s archive and get back to me.

Two days later, Mike rings me back. “Hello, Mr. Stokoe, I’m afraid I have an apology to make – we spoke on Tuesday night but I forgot to save the comments onto your account, can you remind me what we were discussing?”

“Hello Mike, we were discussing the fact that I was concerned that one of your colleagues had not left comprehensive notes about our discussion in 2012.”

Mike clearly understood the irony of the situation, I encouraged him to look again, adamant that he would find the information to back up my story.

A few days later Mike posted a noted on my account pointing me at the complaints department and said there was nothing more he could do without notes to clarify the situation.

“In order to add discounts to an account, we would have needed to raise a ticket … the ticket definitely would have referred to 12 monthly discounts”. Definitely? Clearly not, otherwise you would have found it.

The Total Cost of Plusnet’s Incompetence

The biggest cost to Plusnet of their incompetence (and sometimes arrogance) is blogs like these – word of mouth advertising matters a lot in this age where a free Twitter account can give you the same amount of exposure as £10 million of advertising spend would have in 1990.

Will I ever deal with Plusnet again? No. Absolutely not. It’s not the financial loss to myself which was the final straw, the final straw was the fact that Plusnet must have still been making a profit even after price matching Sky Unlimited – otherwise they wouldn’t have matched it. So by doubling the price through some admin trickery, they’re just showing their greed. By forcing me, a customer, to prove I was telling the truth, having to encourage them to look through their own systems of logging, and then having them say (without any evidence or any reason for repudiation) they had to take the default stance that I was lying to them and their overcharging me was my fault for not noticing it, it’s unforgivable.

Fuck you very much.