Eyewitnesses say the aircraft was low on approach and had a very nose-high attitude right before the tail struck the sea wall at the end of runway 28-Left (28L). The tail section sheared off along with at least one strut from the main landing gear, which is visible in the pictures from the beach.

Immediately this resembles the British Airways flight 38 crash landing where a similar Boeing 777 crashed at the end of the runway at Heathrow, however there are several factors that suggest the causes here are different.

The BA038 incident occurred after the aircraft had flown through some unusually cold air causing water in the fuel to turn to ice. As the aircraft approached Heathrow, the relatively warmer temperatures closer to sea level caused some of the ice to be released into the fuel pipes. This ice hit a system known as the fuel-oil-heat-exchanger (FOHE for short) and solidified. This caused a dramatic reduction in fuel flow to the engines and a lack of thrust. The rest is history – the aircraft hit the ground with so little forward momentum that it stopped almost immediately but hard enough to drive the landing gear through the wings. That’s how they are designed – you want your landing gear to fail before the wing fails! BA038 bellied onto the end of the runway and everyone escaped unharmed (except for some minor injuries picked up by sliding down the escape slides).

But this appears to be a totally different problem for one critical reason: the engines on the Asiana Airlines, and associated fuel systems, are different. The FOHE issues that hit the BA flight are specific to the Rolls Royce Trent 800 while the Asiana is equipped with Pratt and Whitney PW4090 powerplants.

Personally, I think it’s fairly obvious what has happened here. But I may be wrong.

The key factors to bear in mind are:

These items indicate, to me, a “low energy state” at the latter stages of the approach. What pilots call “low and slow”. Low energy states in aircraft can result in aerodynamic stalls, especially when performing manoeuvres such as turns.

The fact that the main landing gear can be seen lying on the beach on the other side of the sea wall to the airport means the aircraft impacted that well before the threshold of 28L: 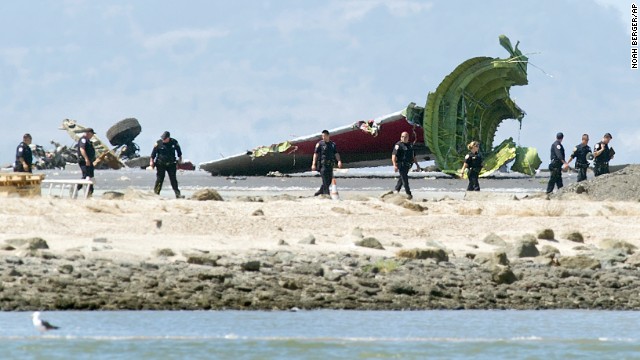 There is also a long debris trail from the sea wall all the way to the final resting point of the 777. 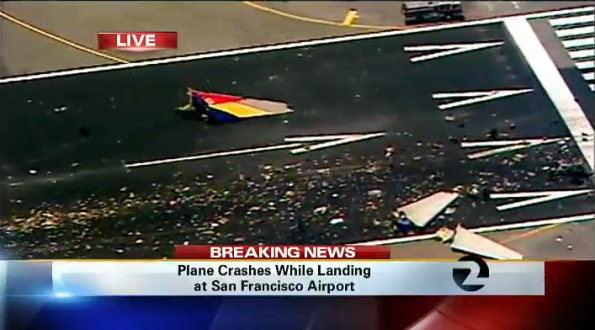 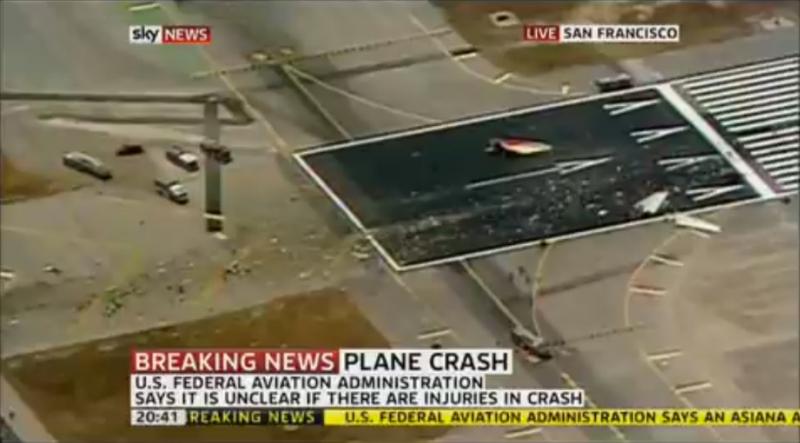 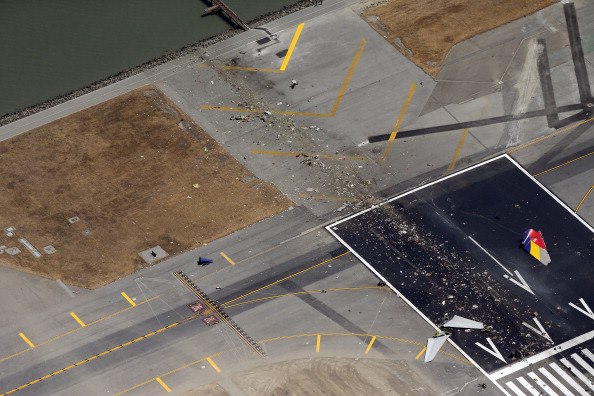 Except for a mechanical failure in the elevator or horizontal stabiliser (the smaller “wings” at the back of the fuselage), it looks like the pilot-flying was very slow and had brought the nose up to maintain lift over the wings. By increasing what is known as the “angle of attack” of the airflow over the wings, you can stop a plane from “sinking” too fast. However, you also increase drag, which can slow it even faster, perhaps leading to a stall.

So, with a slow aircraft, sinking fast, nose-high, thrust levers probably pushed to maximum by this point, the right main landing gear hits the sea wall, the tail section strikes almost immediately after, ripping the empennage from the rest of the fuselage.

With the enormous PW4090 engines still trying to spool up, the body of the Boeing 777 crashes into the runway and the remaining landing gear collapses. The left engine (“number 1”) is ripped from its pylon and the aircraft skids to a stop.

And then a ferocious fire starts (picture below from Tiffany Trump): 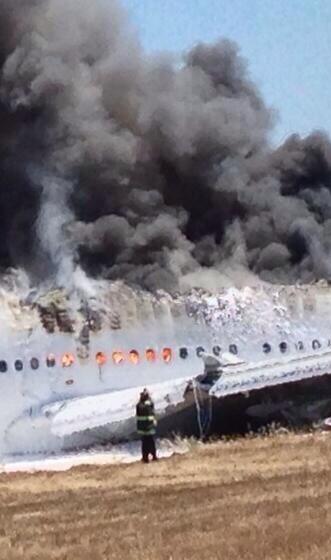 A brief lesson in runway markings 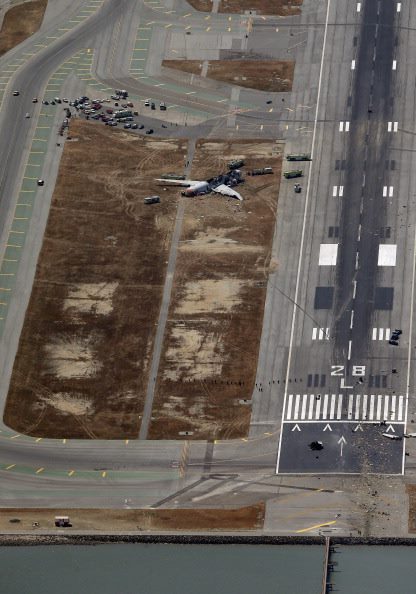 If you’re not familiar with runway signage and marking (and you’d be pretty sad to be…) the arrow at the very bottom of the picture above shows an area that can’t be used for landing on – but can be used as part of a take-off – i.e. it may be a bit weaker than the rest of the runway and can’t handle the impacts. Alternatively, it may just be there to avoid having a runway threshold too close to the sea. Most likely in this case.

The “runway threshold”  itself if the solid white line across the width of the runway with the four arrows attached to it. On the other side of this line are “the piano keys”.

You can also see two big white rectangles either side of the centre line of the runway – that is the “touch down zone” or TDZ. Usually at the 1,000ft point of the runway, that’s your aiming point.

The LiveATC service, which I’ve mentioned before, has a recording of the air traffic control radio broadcasts from the crash. The crash occurs at around 21 minutes and 50 seconds into the recording:

Usually, aviation enthusiasts find news coverage of aviation-related stories to be extremely painful. It tends to be the least accurate reporting of any journalism. CNN has been the worst culprit on this accident. Their reporters were emphatically claiming that the aircraft had somersaulted, ripping the wings off – meanwhile, their cameras showed the widebody sitting right-way-up with wings still attached.

Often, you find them claiming an Airbus has had a problem when it’s a Boeing or an Embraer or something else entirely. While you may not care about the brand of plane that has crashed, it means a lot to those of us who do. To bring it home, it’s like CNN reporting a problem with an HTC smartphone, when it’s actually an iPhone with the problem. It’s not that difficult to do a little bit of research!

On this occasion, I found the MSNBC coverage to be remarkably competent:

A very sad, tragic event, bringing with it the end of a run of luck on the 777, one of the finest machines produced by mankind.