Nobody really knows what the world of future technology will bring. 10 years ago the word “Facebook” didn’t mean anything, Nokia was the largest mobile phone maker in the world, Apple’s very first iPod was only 6 months old, Bill Gates was still in charge of Microsoft having just settled the lawsuit filed by the DoJ, and Google hadn’t even gone public yet. In 10 years time we can expect more crazy changes as technology advancement is accelerating at unprecedented pace. Here is a story which encapsulates some of my predictions about Earth, 2022.

Chen slammed the door shut behind her, leapt down the steps three at-a-time and hit the pavement running. She absolutely could not be late for this interview!

“Six fifteen, precisely,” said the tiny earpiece. It was probably right. It was as accurate as any atomic clock on Earth. “You have nine beats to arrive for your interview.” Her music resumed, at the perfect volume for the ambient noise on the streets.

“Thanks.” She accelerated through the New York City pedestrians clogging the streets. To be fair, it wasn’t gridlock. Most business was done from the home these days so there was easily enough room to sprint without slamming into anybody (too hard). Ultra high-speed broadband connections (MassivBand®) meant you could hold MassivDef® video conferences with tens or hundreds or even thousands of people at once (Bono had broadcast to the entire world at Band Aid 2020 in aid of 3rd-world, poverty-stricken Great Britain). Where great corporate skyscrapers once stood, now enormous, futuristic looking glass towers with the sole purpose of housing telecommuters stretched into the clouds.

No time to enjoy the scenery. Chen’s suit was graphene-polycarbonate, its fibres moved and ebbed to force cool air through to her skin, keeping her cool. Even while running. Sweat is not welcome at job interviews… 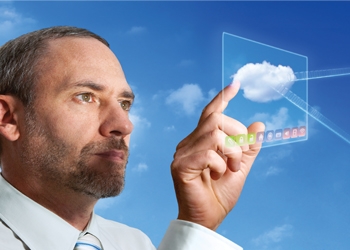 In 2022 there are two types of Cloud, App Clouds and Data Clouds.

Each software company has their own App Cloud, an always-on, always up-to-date  and freely integratable suite of applications. Through a highly secure triumvirate of biometric, geolocation and voice authorisation, all of the software in your life can speak to eachother and exchange the data that they need to. Nothing is “synchronised” in 2022, there is only ever one application that managed each bit of data and any other application that needs to reference that data accesses it directly. No more balancing your chequebook! Your cheque book (or rather, your iWallet) is always up to date because it asks your bank app for the balances in real time.

Software companies are experts at making and securing software. Meanwhile, Data Cloud vendors are experts at keeping data secure. Gigabit encryption combined with bioharmonic fingerprinting means your data is only yours. And by decoupling the software from the data, a grand economy of competitive App and Data clouds were born. 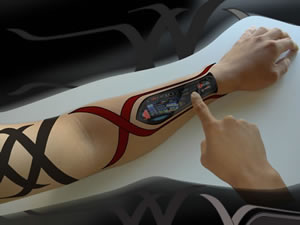 She ran past an open air café, the MassivCorp DuraSleeve® on her wrist vibrated gently to indicate her Personal Area Network had received an automated message. It vibrated again. Two messages.

At least it would give her something to concentrate on. “Read messages,” she said.

Her music in the tiny earpiece faded out quickly and was replaced by a soft, femine voice. “Today only, a Cappuccino and a double chocolate muffin, five dollars, only at Mama Rosa’s, 22nd and 5th.” The voice was computer generated but completely realistic. Indistinguishable from the real thing. Mama Rosa’s had also clearly insisted that their advertising was authentic; the voice had the bouncy lilt of an Italian-born American.

Chen intimitely knew the code behind these adverts. It was HTML5.5 and CSS4. The little-used Accessibility functionality in earlier versions of CSS had come into their own in 2015 as mobile devices became considerably smaller. The iBabel in her ear was nothing more than a tiny earpiece, but through voice recognition (securely locked to Chen’s own voice patterns) and ultra-clear, stylesheet-driven speech simulation, it was all that was needed to drive her Personal Area Network (PAN).

Sure, graphene-based cells and circuitry had quadrupled the power output of batteries compared to the early twenty-teens but it turned out that innovation was completely unnecessary. Everywhere you go in 2022, magnetic induction loops would boost the charge on your electronics. Street lamps have them, pavements have them, roads have them dug in, powering the myriad machines driving around.

Batteries are woven into clothing. Graphene-lithium fibres glow gently when activated and the current fashion is contrasting perpendicular and curved lines of different colours. Chen’s 150Amp-hour trouser suit was enough to power her Nike Fuel body sensors, a pair of Blue-Fi transceivers for ultra-high-speed short-range comms and a half-terabit wireless network. In 2018 you could buy eight-terabit wireless for the home or office, but nobody used it. Music, even at 10Mbps quality, can only be listened to one track at a time, movies and even MassivDef® video conferencing were hugely compressed. So, in the end, manufacturers stopped competing on speed and started working together on compatibility and frictionless use. By 2022, wirefree networking had settled on half-terabit with free flowing data everywhere. 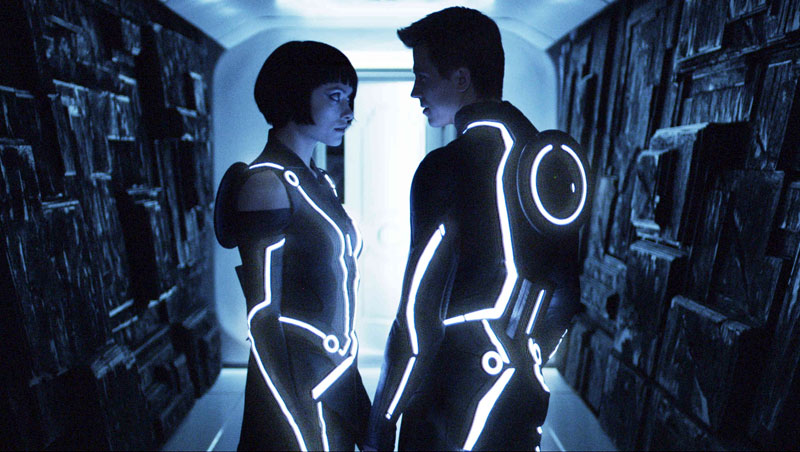 Chen listened to her second message from the café as her legs started to burn. Her iEyeCaptain augmented-reality glasses had already plotted and displayed her Estimated Time of Arrival. It didn’t look promising. The edges of her glasses glowed red. She pushed harder, following the most efficient route. 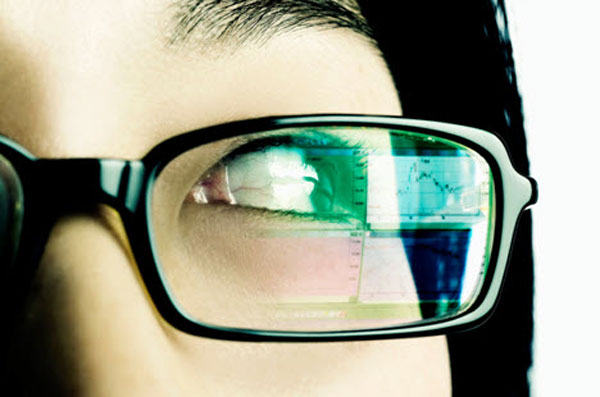 A man’s face appeared. “I see you’re on your way to an interview for a job in the field of Personal Technology? If that doesn’t work out, give me a call. My name’s John and I work for Massiv.jobs. I’ve put my number into your directory. Have a nice day!”.

“Save last message,” Chen said. It’s always good to have a Plan B…

Finally, with only 2 beats to spare (the equivalent of three minutes in old time), Chen entered the building for her interview. Immediately, her PAN was updated with health and safety information and the location of all emergency exits. She checked in with Reception and was told that her interviewer would be along shortly. A bottle of water was dispensed automatically by a nearby vending machine, which then thanked Chen for her custom. She drank. 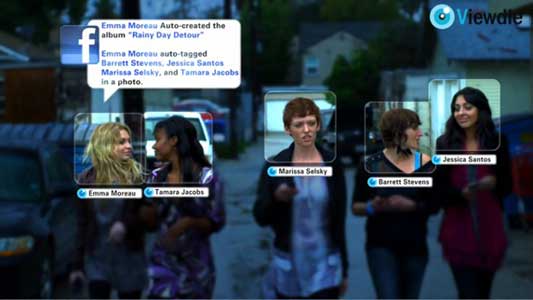 When the interviewer arrived, Chen was reviewing notes and webpages. Her glasses automatically switched to give her Profile information about the woman who would interview her. She was short and had blonde hair. She liked dogs and owned two Golden Labradors. She lived in Manhattan with her boyfriend of three years, Mark. Her father had recently passed away after a long battle with Smallpox, which had reemerged in the late twenty-teens.

In 2022 it is not uncommon to find two people walking up to greet eachother then stop motionless for a few seconds while they reviewed each other’s public profile data. Chen knew that all of her public information was also currently being scrutinised by the person who would decide her employment destiny.

As they walked across the threshold into the interview, Chen’s glasses scrolled vast quantities of information about the people in the room. When she looked at each person, the display calmed down and showed only relevant information to that person. She shook hands and greeted appropriately.

Chen’s employment history was downloaded and read by the other occupants in the room, while Chen read through the job requirements again and started assigning previous experience to each requirement. The room was silent, although each person had music playing softly from their personal iBabel.

“OK,” said Jamie, “your resumé matches our needs, but what else can you bring to the post?”

Chen smiled. Time to play the trump card. “I used to work for Facebook. You know, before the mergers. I was Lead Developer on their first Personal Advertising Programme.” 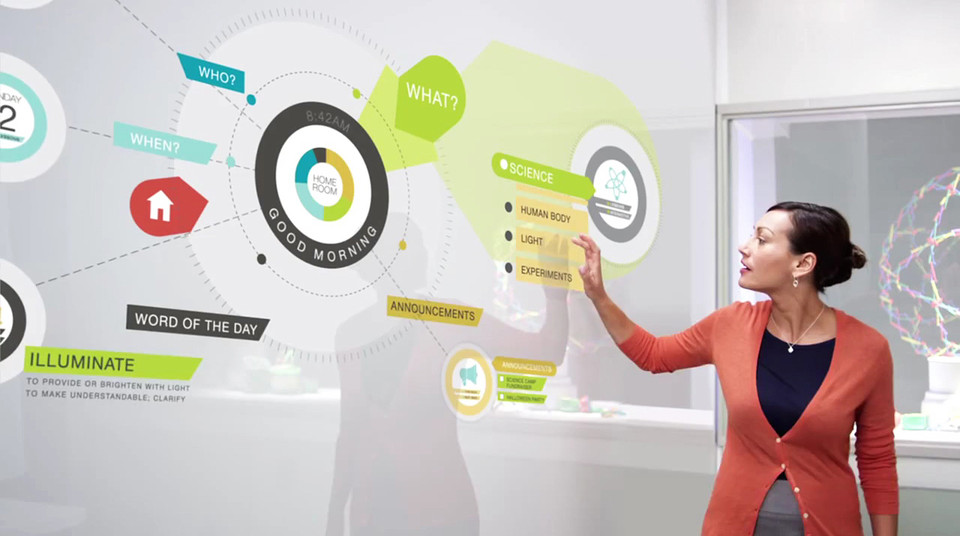 Chen pushed photographs from her private Collections onto the MassivBoard® in the room. “This was my team.” There were some well-known people around the table. People who would have been in school as recently as four or five years ago.

“As you already know, the PAP was ridiculously successful. It ruined Google AdWords overnight. Google were just too slow to keep up. We were innovating at a super-aggressive pace.”

There were looks of admiration from the people facing her.

“Once Facebook bought Google,” she smirked, “for a dollar…”

There was  chuckle from her interviewers.

“… I decided to take my retirement. I hadn’t foreseen what Facebook would do next and how that would damage Apple enough to also be swept up for a buck. Otherwise I would have stayed and added a few billion to my share options!!”

Knowing nods from around the room. 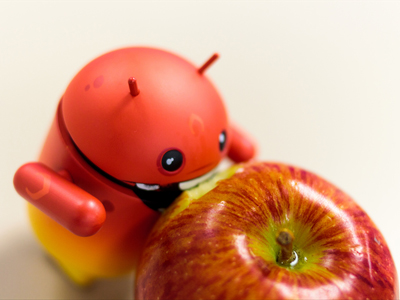 “So I was never part of the Facebook-Google-Apple merger,” or MassivCorp as it became known. “Lessons learned, and all that.”

She pushed pictures of those who had stayed behind onto the MassivBoard®. Well-known faces at the top of the global Rich List.

Jamie spoke. “As you know, we’re ten times the size of MassivCorp. Nobody expected what we did with Windows Phone 10 and Skype. That, and the 3D Metro interface revolutionised everything.” She glanced from one colleague to the next, getting their votes. She looked back to Chen. “And we’re growing while they look to have peaked. You seem to have impressed my colleagues here so I guess there’s only one question left to ask.

“How do you feel about being Microsoft’s newest VP?”

Chen skipped home with a smile on her face as notifications poured in from various autonomous systems and linked applications. She cycled through them.

“Congratulations on your new job,” said the Bank app. “We have increased your overdraft by 30% and your automatic savings by 10%. Have a nice day.”

“Our records show you have changed jobs,” said the Home Insurance app. “We have updated your premium accordingly. You have saved fifty dollars and twenty five cents this year. Have a nice day.”

Another chime. “Congratulations on your new job,” said the Water and Gas app. “As you will be out of the house more, we have reduced your fees by 20%. Have a nice day.”

As soon as Microsoft had clicked ‘Accept’ on their recruitment system, it had spawned off a thousand processes which updated hundreds of thousands of systems throughout the Cloud. By realising that people only performed a finite number of tasks in relation to a product or service meant that an enormous amount of effort could be saved through careful autonomy. That is, autonomy that is linked, traceable, transactional and most importantly, cancelable where necessary.

For now, however, it all sounded positive. Chen even indulged one of the adverts that had appeared in her inbox.

“What better way to celebrate that new job, birthday or marriage..”

“… than an Audi Calamaro. Vertical take-off and landing, Bose entertainment system for those long flights, whisper-jets for those late night arrivals so you don’t wake the neighbours!” A comedy trombone slide cued Chen to delete the advert.

Although, with a mile of pavement still to walk, the idea of a brand new Aerocar sounded good. She undeleted the advert and paid the deposit there and then by VoxPay® (A MassiveCorp subsidiary).

“Thank you for shopping with Audi. Your brand new Calamaro will be delivered in 3 hours and forty five minutes precisely.”

At least their logistics system was better than their advertising…

As Chen celebrated with a five-dollar double-chocolate muffin and a Cappuccino at Mama Rosa’s, and watched the city flow past she decided it was truly A Good Day. She allowed her public profile to glow green around the edges to let everybody know her mood. Despite the increase in the advertising that would cause… People buy more when at an emotional extreme.

“Time?” she asked her iBabel.

“Just gone @700,” said an obscenely handsome man at the next table, who was also partaking of the five-dollar deal. He smiled at her.

The glow around her profile grew brighter and greener. And Chen smiled back.