Apple have just released their 2012 1st Quarter results. You might want to sit down for this…

Back in July I reported on Apple’s 2011 Q3 results. They were very good. Back in October, I completely forgot to report on Apple’s Q4 results, which saw revenues get diluted because people were waiting around for the “Big Announcement”, which ended up being the iPhone 4S, yet also saw record Mac and iPad sales. That quarter was also when the world was shaken by the loss of Mr Steven Paul Jobs.

Today, Cupertino has released their 2012 Q1 figures. Here are the headlines and a nifty graph I knocked up in a few minutes of intimate statsmaking with Excel:

Now lets see how this compares with the prior two quarters: 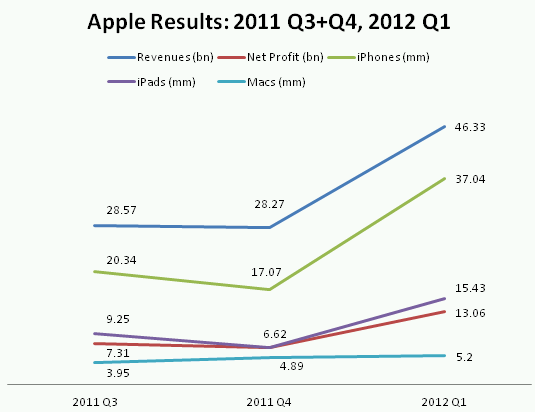 That’s not a bad show. Christmas has given Apple record figures all round.