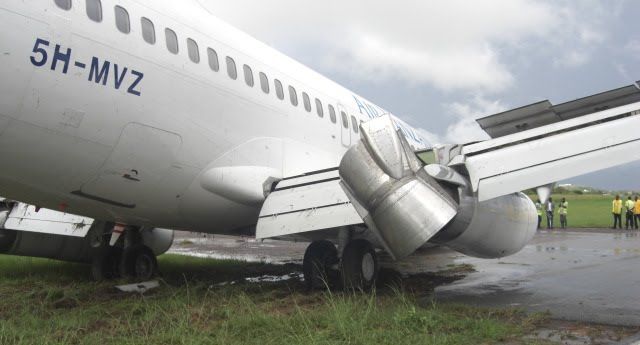 “Ladies and Gentlemen, does anyone know how to fly a plane?”

The question they should be asking is, of course, “does anybody know how to LAND a plane?” Flying is easy. Landing is hard. It is every Flight Simulator geek’s dream to be asked into the cockpit to save a pressurised tube full of terrified holidaymakers. But faced with an actual 40-ton flying shard of impending death, could you actually do it?

All of a sudden we were at 700ft with Aberdeen’s now-familiar runway 16 ahead of us. Wind was calm, flaps were down, gear was down and I had a 30 million dollar aircraft and 100 souls in my hands. (In my mind)…

Peter un-paused the sim and I guided the plane down as I had practiced at home. The VSI needle read -750 feet per minute, a nice gentle descent down the glideslope (GS). However, I was used to automated call-outs and this aircraft was designed about 30 years before they were added to aircraft.

I kept the 737 on the centreline, aimed for the touchdown zone (marked by large white rectangles painted on the asphalt) maintained 750ft per minute descent until I guessed we were about 50ft off the ground then I closed the throttles and pulled back on the yoke to soften the landing.

“On the numbers!” Called Peter. (This is a good thing).

I lifted the reverse thrust levers and heard the engines start to roar as they dumped their thrust forwards instead of out the back. I hadn’t landed exactly straight so I used the rudder to straighten up before we got down to 80 knots again and it would become ineffective.

“80 knots,” Peter called for the second time that day.

I steered off the runway and onto a taxiway where Peter asked me to stop.

Landing the Boeing 737 at Night

Next Peter taught me a valuable lesson: “trust your instruments.”

We did another take off, this time at night, only this time when we got up to 3,000ft I experienced a massive feeling of disorientation. Just south of Aberdeen airport is a hill and there is a string of lights going up the hill. However, up at 3,000ft I couldn’t see the hill. Or the ground. Or the sky. It was a mass of pitch blackness. All I could see was a diagonal string of lights, and it made me want to try and level the plane with those. My mind said we were already banking to the right, but the Attitude Indicator (AI) assured me that we were nice and level.

It was a very strange feeling! One that may have caused the crash of Flash Airlines flight 604.

Next we tried a night landing, except for the fact that I could’t see the runway, just a bright trapezium of lights, it was the same as landing during the day. The trickiest part was the touchdown. It’s much easier being able to see the dirty asphalt flowing past and judging the landing based off that, rather than seeing a blur of bright lights whizzing past…

It was more “thud” than “bump”, this time round. But bang on the centreline. If “a good landing” is one you can walk away from, that one was… good! 🙂

Up next was another landing at Aberdeen… which was swimming in a nice thick pea soup.

Most commercial airports have two sets of radio beacons on the runways that guide aircraft in: one for vertical navigation (the “glideslope”), one for horizontal navigation (the “localiser”). Together they form the “ILS” – Instrument Landing System.

At 700ft, I picked up the localiser and started descending at 750ft/min on the VSI (since that worked before).

“Now, whatever you do, don’t be tempted to look out the window,” Peter said as the descent stablised and my ego started to inflate massively. If I pull off my third flawless landing I’ll be revered as a flying god!

Down to 300ft now and all looking good. Speed down to “VRef” – or “Reference speed” of 140 knots. VRef is your approach speed, taking into consideration things like winds (including gusts, which can cause wind shear).

“Minimums” are the lowest altitude you can reach before seeing the runway (or runway lights). If you can’t see the runway by minimums, you abort the landing and go around. Typically, minima (or “decision height”) is 200ft above the airfield altitude.

At 250ft I looked up from the instruments expecting to see the runway, and being able to visually fly the rest of the approach. All I could see was grey. Dense, thick grey. I looked back at my instruments and the runway had hopped 100ft to the left.

Then I realised Peter’s game – this was a go-around in the making! I prepared to throttle-up and head back into the big pea-soupy yonder.

I banked left and tried to pick up the localiser again. The closer you get to the runway, the more sensitive the ILS radio beacons are. It was a nightmare to get it tracking again. I looked up from the instruments and saw the runway off to the left and decided to complete the approach visually.

200ft isn’t a lot of wiggle room when you’re heading towards the ground at 750ft per minute. In the real world, we’d have gone around, but my time was running out and Peter hadn’t demanded the go-around.

The wheels touched down, it was gentle! However, the left main landing gear was on the runway and the right was quite firmly planted on the grass….

I stamped on the left rudder and we swung onto the runway, then a stamp to the right straightened us out onto the centreline. In the chaos, Peter had pulled the reverse thrust levers out and the engine noise rose, the airspeed indicator showed us slowing under 80 knots. Peter stowed the reverse thrust clamshells and reached across to the nose-gear steering tiller while applying toe-brakes.

We came to a stop and then Peter said the words I’d been dreading.

I stepped out of the Captain’s seat and into one of the observers’ chairs, while I was replaced at the controls by a guy from Inverness.

I may have screwed the landing in fog, but at least I didn’t try to use the nose-gear steering tiller at 120 knots on landing.

Do you know what happens when you try and do that?

Now THAT was cool!!