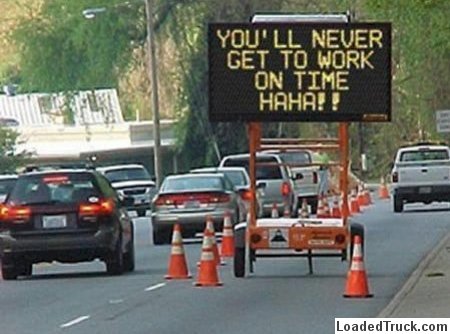 This month a local authority in the north-east of England have executed a nonsensical, short-sighted strategy to drive their tax-paying customers to frustrated anarchy. If you can make any sense of this please let me know in the comments at the bottom.

For as long as I’ve known there has been a wonderful example of road planning perfection at a very busy roundabout on my commute.

Handling a substantial amount of rush-hour traffic, despite being a renouned pinch-point, the approach to the roundabout splits two lanes into three, serving one of England’s most populous cities and also local destinations.

So why are Gateshead Council stupid?

It all sounds so sensible so far, and we can hardly blame them for breakdowns and essential road maintenance can we?

Well, for apparently no reason at all, except to incite hatred towards them, they have chopped off one of the lanes at this roundabout. Here is the new layout:

So they’ve turned a two-lane road into… uh… a two lane road. But in the most asinine way possible. By splitting one lane, and ending the other slightly short. Surely that pavement didn’t need to be any wider?

While the road wasn’t broken and didn’t require fixing, if you’re going to try a new layout why not just make each lane continue up to the junction at the roundabout? Doesnt’ that make infinitely more sense?

There are proposals to build 1,000 new houses upstream from the roundabout, which will turn this pinch into a total, freaking nightmare. While residents have unanimously rejected these plans, they also rejected plans to build a landfill site a mile away from this roundabout, and yet permission was granted to rubbish-burying experts, SITA. I wouldn’t be surprised if the proposals go ahead after all. It is amazing how well money talks…

Do something about it

If you live in the area affected by this, please contact Gateshead Council using this form. Here’s the complaint I have submitted, to get you inspired:

Can somebody please explain the sense behind the removal of one of the lanes on the B6317 approach to Blaydon Roundabout (A695)? This is a major pinch-point at rush hour and it has just been made much worse by this change in road layout that has no practical purpose.

It is a ridiculous, completely counter-productive waste of tax-payers money.

As Gateshead Council plans to allow housing developers to build hundreds of new homes upstream of this pinch point (despite MASSIVE outcry from existing residents like myself who know how bad the infrastructure currently is without a surge in population and traffic) this situation os only going to get worse and worse.

Please reverse these changes immediately and apologise to the people you have unnecessarily inconvenienced.

Stand up for your rights as a tax payer and do something positive for yourself and your local community!!

@GMBCouncil Why the changes to the #B6317 approach to Blaydon Roundabout are so ridiculous: richstokoe.com/2012/06/16/stu… #taxpayer