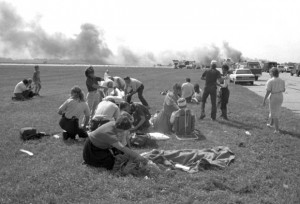 FILE – In this July 19, 1989, file photo, emergency workers treat injured passengers following the crash landing of a United Airlines DC-10 jet that killed 111 people at Sioux Gateway Airport in Sioux City, Iowa. Dennis Fitch, of St. Charles, Ill., the pilot who happened to be a passenger and helped save 184 people after the crash, died May 7, 2012, after suffering from brain cancer. He was 69. (AP Photo/The Sioux City Journal, Gary Anderson, File)